Kitchen Hood Venting: Vent to the Outside or Recirculate? 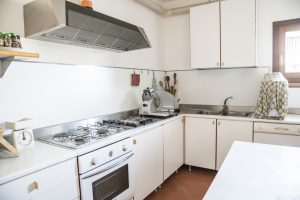 There are many beneficial reasons to install a kitchen hood. An installed hood is important to air quality as it effectively filters out smoke, grease, and carbon monoxide fumes. The hood also provides temperature control, keeping the cook at the stove cool and comfortable. But as with most home appliances, there are choices to be made when considering a kitchen hood; specifically, should the hood vent air outside, or should the air be recirculated? And as with most home appliances, there are pros and cons to both choices. Below, we’ll review the both pros and cons of kitchen hoods that vent outside versus recirculating hoods.

First, let’s briefly review how these types of vents work. Venting hoods, or ducted hoods, either connect to an outside source of air or filter the air. When in use, venting hoods pull cooking fumes, smoke, and pollution molecules, such as carbon monoxide from smoke, either directly outside or through a filtration system. Recirculating hoods, or ductless hoods, work much the same except for one key difference. The air, instead of being forced outside or through a filter, is recirculated back into the kitchen. In this brief explanation of how hoods work, we’ve already discovered one pro and one con. Ducted hoods are better at filtering out bad air, while ductless hoods are only capable of filtering out less of the bad air. Ducted hoods offer better air quality as they pull out more of the polluted air within a kitchen, and can offer some serious health benefits to people with allergies, sensitivities, or even asthma.

Codes and standards can be also major point when deciding between a venting hood and a recirculating hood. A person interested in a venting hood may live in an apartment that prohibits any piercing of the exterior walls. Colder parts of the world have different codes for make-up air, which is essential when using a ducted hood. Ducted versus ductless hoods, when it comes to codes and standards, depend on location. Ducted hoods are more likely to be prohibited in the case of an apartment or rented home, and require make-up air, which has different codes attached to it. Contacting professionals experienced with HVAC systems in Minneapolis can be helpful, as HVAC systems can provide some make-up air.

When choosing between venting and recirculating range hoods, there are a number of factors to consider, some more limiting than others. Venting hoods attach to outside ports and are capable of filtering out more smoke, bad smells, and grease from a kitchen. This means better air quality inside the home. However, venting hoods require a source of make-up air, as air being pulled from the house has to have some replacement, and require an outside port, which may not be allowed in apartments or rental spaces. Recirculating hoods, while they are more easily adaptable around cabinetry, don’t have the filtering capabilities that venting hoods have, which means more of the polluted air and grease particles are getting filtered back into the home. Each choice has benefits as well as negative points, and each point we’ve presented in this article should be considered as part of the decision-making process